As a Lowveld resident how do we know that Christmas is coming? Not because the geese are getting fat but because Christmas Beetles are humming in full chorus, so loud at times that it is difficult to hold a conversation in their midst. They start their merry song when the weather is hot and balmy about a month or more before Christmas and continue well into January, or even early February at times. Hence the name we all give them.

Actually they are not beetles at all, but an insect in a Family of their own, known as the Cicadidae, commonly called Cicadas. There are many species throughout the country and the one we refer to as a Christmas Beetle is generally the Giant Forest Cicada Pycna semiclara. Its favourite hang out is subtropical riverine forest and you will certainly hear them in the Klaserie Private Nature Reserve along rivers and drainage lines where there is dense tree cover. It is a large insect with a wingspan of about 90 mm. They are not easily seen as their green and brown colouring blends in perfectly with the trees they attach themselves to in order to feed on the sap. Also, their song has a ventriloquial effect, making it difficult for us humans to locate the exact spot where the sound is coming from.

Like many humans they are gregarious and congregate in large numbers, attracted to each other by the loud music the males make by singing in chorus. The females are voiceless but lovingly home into the non-stop, shrill and deafening music played by the guys.  The males are unique in that they have a built-in sound producing organ consisting of a cavity on both sides of the abdomen where the drums are lodged and this sound-producing organ is covered by plates. The drums, or timbals, are tightly stretched membranes with strong muscles attached to them. By contraction and expansion of these muscles the timbals are made to vibrate, producing the shrill sound. The plates can be raised or lowered during the song to increase or diminish the sound, and thus attract some gorgeous and loving female. She has a pair of mirrors at the base of her abdomen that serve as her ears. Just like some of our kind the loud song serves as an assembly call and also has a stimulating effect on the mating instinct.

Something else similar to us is their complicated life history, and they take about seventeen years to reach maturity. In South Africa their life history has not been well documented, but in North America there is at least one species on which detailed studies have shown their longevity. Throughout its life our cicada is a sap-sucker, and because of the constant fluid intake they actually need to pee frequently, believe it or not. Thus it is wise to wear a hat when walking under trees full of cicadas, and it is not wise to open your mouth when looking up.

Eggs are deposited by our male songsters chosen female in slits in the bark of trees where she has been feeding on the sap. They take about six weeks to hatch and the little infant resembles its parents but is stoutly built and has spiny thighs that serve as digging instruments. The little chap drops to the ground and immediately burrows into the soil, where it spends its entire immature life in search of roots where it can feed on the sap and slowly grow to maturity. It then emerges from underground, climbs a short way up a tree trunk, where it rests for some time before its skin splits down the back and the adult cicada struggles out, slowly and laboriously.

Most humans have a dread of insects en masse and fear that they must be doing damage to the vegetation. Then of course out comes the insecticide. In the case of cidadas they are not doing any damage whatsoever and in fact are beneficial to the ecology. First of all they are a valuable food source to birds and other wildlife, and even to humans in some areas.  Their egg-laying in slits in the tree produced by the females is a natural prunage which results in new foliage and more and better fruit production. Still further, emergence from the ground by numerous youngsters turns over the soil and decaying bodies when they die puts nitrogen and other nutrients into the soil.

The final stage in the life-cycle is when the new arrival, our teenager, is clinging to a tree trunk after struggling from the split skin of the sub-adult.  As soon as his wings have expanded and dried he is ready to fly away and spend time reveling in the sunshine, singing his loud, monotonous song to attract a mate and start the process all over again.  Christmas is ‘humming’.

Take a look and a listen to this video to hear the ear-splitting hum of Cicadas in Mozambique's Gorongosa National Park. 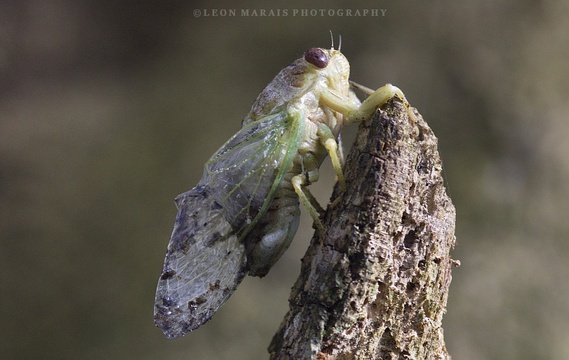