Posted by Leon on Thu July 15, 2021 in Interesting sightings. 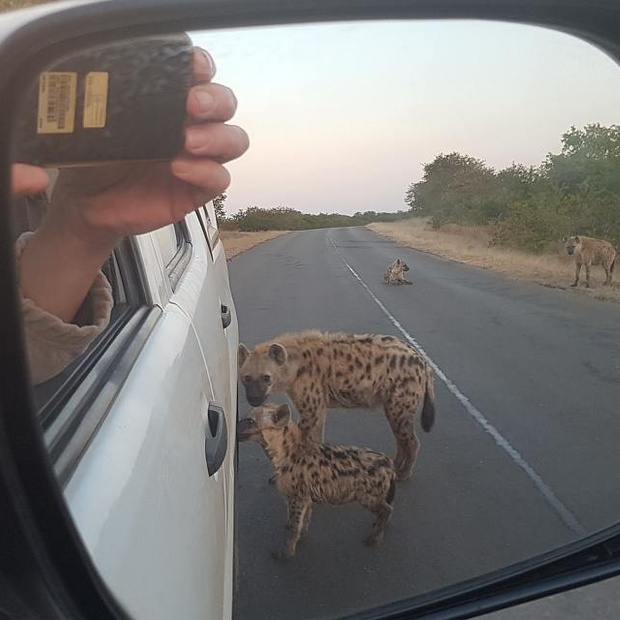 On the average Kruger safari, Spotted Hyenas are seen more often than any other large predator. Yet they are often ignored, or given passing interest at most. A Lion's foot sticking out of the long grass will draw massive attention from visitors (in case it lifts its head), yet down the road a clan of Spotted Hyenas lying ON the road will maybe have a vehicle or two in attendance. Yet Hyenas are actually very cool animals, exhibiting some very interesting behavior! And they can be rather grim as well...

On a recent Kruger safari tour visiting the Letaba area, we knew of a den site close to camp - one of the usual dens in a drainage pipe under the road. We could see that it was occupied, by the bones on the road in the mornings, and fresh signs of entry and exit.

But on several trips out there were no Hyenas to see. The adult Hyenas go on extended foraging trips, sometimes lasting several days, leaving the youngsters behind in the den. And with the cold weather the pups were reluctant to come out, as it was probably warmer down below than it was up on the road.

But one morning on the tour it all came together, and we arrived at the den just after the adults had returned. It's always a joy to see these reunions, the youngsters visibly elated at having the adults back home again. As we were watching, something interesting happened - one of the larger Hyenas regurgitated something - possibly semi-digested food - onto the road, and immediately the other members of the clan jumped in and began rolling enthusiastically in it.... Check out the video.

As to why they do this, there has been some research done. It seems that individuals who smell more may garner increased social attention from other clan members. The research was done in terms of the smell of carrion / meat (they also love to roll in putrid meat), but perhaps may apply to vomit as well. Interesting behavior! Who knows, but they are wonderfully grim but somehow still lovable creatures! Well, at least the little ones are....

See Hyenas and much more on our Incredible Kruger safari