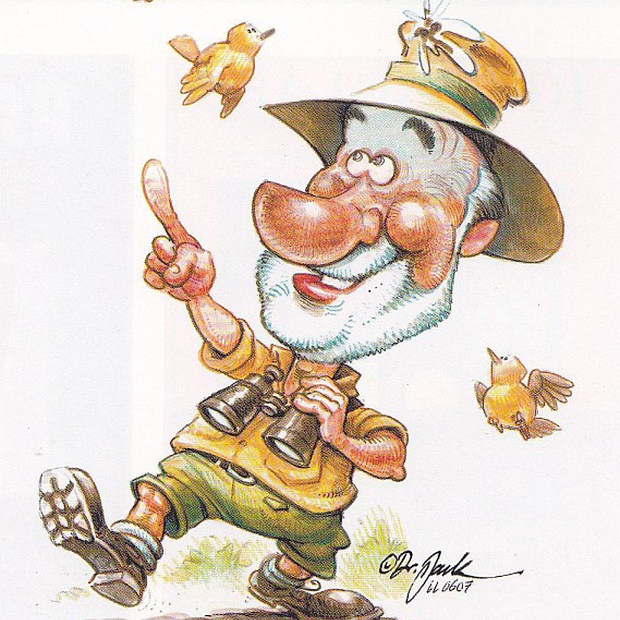 If 2020 gave us anything, it was time – time to learn and take on new hobbies and pursuits. And birding became one of the new ‘cool’ things to get into. It’s one of the Covid-19 winners, along with virtual safaris and multi-national drug conglomerates. All over the world, laypeople became birders overnight, as it’s something that one can do in the back garden, helping to pass the time and keep the grey matter stimulated during the dark days of hard lockdown, when the golf course and bridge club were well out of bounds.

And this time of the year is also a time to take on a bunch of self-improvement projects – become more financially savvy, lose some weight, read more, and maybe become a better birder. But being a better birder means different things to different people. An advanced birder may want to learn about the birds of a different country, ahead of a potential visit. A beginner on the other hand may just want to become more confident as far as the birds of their local patch go. We’re all at different points on the birding journey, and while at the beginning there’s much to learn, even those who’ve been at it for most of a lifetime are still learning. Indeed, there is no end point to this journey…

So herewith are five tips for beginners to improve their skills and Become Better Birders in 2021.

Get a new bird book (Roberts and Sasol are two of our current top picks) and spend time paging through it. This will prime your brain, so when you see a bird in the field you may recognize it because you’ve seen it on paper before.

This is critical to being able to identify birds. There are birds with similar colour schemes but which belong to totally different Families. Knowing which Family it falls into is vital – if you’ve got a Lark in front of you but you’re paging through the Pipits, you just aren’t going to be able to clinch the ID. Families group species with certain commonalities, so they’ll generally behave in a similar way, and perhaps have similar physical characteristics. If you can immediately identify a brown bird as a Lark rather than a Pipit, you’re on the right track.

It’s tough, but crucial. In the past it wasn’t easy to get hold of the full set of Southern African bird calls for use in the field (I used to carry a little mini-disk player and portable speaker with me with a set of different disks, which was fairly cumbersome). Nowadays the various phone apps come with calls, so you have them on hand at all times. Sift through the calls on the app, and when you are looking at birds take note of their calls. Eventually you’ll get to the point when you can do most of your bird atlasing / listing by ear alone. But remember, responsible birders are very guarded with the use of payback to attract birds. Use it sparingly and not at all when birds are breeding, or when you are going for specific species in heavily-birded ‘hotspot’ areas. Always put the bird’s well-being first.

Take a look at the Cisticolas in the bird book – they’re bound to put the keenest beginner off! 18 very similar-looking species in Southern Africa alone… But wait, it’s not that bad… Cisticolas are quite habitat specific generally. Is it a Levaillant’s or a Rattling? If you’re standing next to a wet, marshy area in open grassland, it’ll be the former. If you’re in dryish savanna it’ll be the latter. And of course, they are quite vocal, so knowing those calls….

Knowing the distribution of species is also key – in South Africa, unless you’re right in the north of the Kruger National Park, close to the Limpopo River, you don’t have to debate the finer points of difference between Burchell’s and Senegal Coucals (Sengal doesn’t occur much further south than the Limpopo River valley). But, birds do move! So, as you advance, be on the lookout for out-of-range and vagrant species. Finding these is part of the fun of birding (but be VERY sure about it before you announce to the birding world that you’ve found something rare…).

There are plenty of great Facebook groups for birders, and these can be great learning resources. But too often you’ll see someone post a picture of a very easy-to-identify bird and ask what it is. They’ll get their answer and go away having learned nothing, sucking the answer out of more knowledgeable birders but doing nothing to help themselves on their birding journey. Sometimes people will try, asking for help but giving their own ideas, so at least they are having a go at it (but it often reveals that they haven’t got the grasp of points 2 and 4 above). So by all means, ask for help (most more advanced birders are only too happy to help), and don’t be afraid to get it wrong, but try make some headway on your own first – that way you’ll learn something from the exercise. And if you do ask for help, make sure to give a location (point 4 again…).

You don’t have to go overboard with different lists (I’ve met folks who have year lists, country lists, provincial lists, garden and favorite-spot lists, even lists for different binoculars and once a lady who had a list for birds seen in the ‘no-man’s land’ between border posts!), but a life list and perhaps a garden list, and maybe a list for a favorite place, are a good idea. It tells you what’s new and what you’ve already seen and overall, it just helps to contextualize things. Just don’t let the list become the objective – enjoying the birds should be the primary objective.

So, a new year is in the wings, though it doesn’t look like it’ll bring good times just yet, with the virus continuing to ravage the globe. But at least there are now vaccines available! So for experienced birders 2021 may again be slow year in terms of lifers, but for beginners there are usually plenty of lifers within easy reach (oh, for the days when almost every excursion brought a brace of lifers with it!). So get out your book, look at distribution and habitat preferences, go through the calls on your app, start your list and go forth and BIRD!