The idea for a blog on the birds of Nelspruit gardens and parks came when I needed to add in a day in Nairobi to our Birds & Wildlife of Kenya itinerary, as the clients wanted to come in a day early and relax at the hotel. So I wanted to mention some of the birds they may see in the hotel grounds. I did a Google search, consulted eBird, and did some digging on the internet, and in the end it wasn't too hard to thrown in a few common species that one could find in gardens in Nairobi, with the caveat that I didn't want to mention very common species such as Dark-capped Bulbul and Speckled Mousebird that are common garden birds here in eastern South Africa (which the clients would already have seen). And then I had the thought that there may be birders out there searching for common garden birds of my town (for some reason!), which is Nelspruit (also known as Mbombela), in Mpumalanga, South Africa....

So, when thinking of the birds I see in my Nelspruit garden and neighbourhood, there are quite a number that come to mind that are reasonably common but still pretty unusual and / or spectacular, at least for birders from overseas or from other parts of the country. And we're actually pretty lucky in terms of what we consider to be garden birds - I mean, who isn't impressed by a Purple-crested Turaco at the bird bath! And, in the two map pentads that make up the greater Nelspruit region, there have been almost 350 recorded species! So we have a pretty decent avi-fauna component all round.

So here are 12 incredible birds we see with reasonable regularity (at least) here in our Nelspruit gardens. Of course, there are plenty of more common species to be seen - Bronze Mannkin, Speckled Mousebird, Southern Grey-headed Sparrow, Dark-capped Bulbul and the like - as well as rarer species (some folks in the more well-wooded areas are lucky enough to have species such as Narina Trogon and African Wood Owl in their gardens), but for visiting birders here are some pretty cool garden birds to look out for in Nelspruit:

1. African Goshawk.
This is one of the most common raptors in and around Nelspruit. It’s primarily a bird hunter but will also take reptiles such as Agamas and small mammals such as rats and squirrels. If you hear a strange clicking sound seemingly coming from nowhere, look up and you’ll find an African Goshawk in display flight high in the sky above.

2. Freckled Nightjar.
This nocturnal species is associated with rock outcrops, and is not uncommon in the greater Nelspruit area. You may hear them at night, calling ‘pow-wow, pow-wow’ from rocks and rooftops. Amazingly, they nest on bare rocks, raising young in an incredibly challenging micro-environment – can you imagine the heat they have to endure on a hot Nelspruit summer’s day?

3. Purple-crested Turaco.
This is a common local species almost anyone will be familiar with. You can’t help but notice the intense scarlet under the wings as it flies across the road in front of you! And their loud, raucous calls are just so characteristic of the Nelspruit area.

4. Violet-backed Starling.
Our summers are definitely more colourful with these guys around! The males are just exquisite, their colour turning from deep ‘plum-purple’ to red, depending on the angle of the light. The females are a bit more drab – brown on the back, white with brown streaking below. These are Intra-African migrants, present in the region between October and late April.

5. White-browed Robin Chat.
This is our local songster! It’s a very vocal species, inhabiting thickets and tangles and densely vegetated gardens, from where it will chortle away with a series of whistles, starting softly but often becoming quite loud. One can often lure one into view by mimicking its whistles.They are quite common in the gardens of Nelspruit.

6. Crowned Hornbill.
Nothing says that you're in 'the bush' quite like the Hornbills. While the nearby Kruger National Park has half a dozen species, we're not quite as lucky here. Trumpeter Hornbills can be seen in some areas on occasion, but winter sees a massive influx of Crowned Hornbills - from where, I'm not quite sure! Last winter I had great pleasure every morning watching flocks of 50+ arrive to feed on the Natal Mahogany fruits in out neighbourhood - seeing squadrons of them gliding in from across the valley one almost expected Ride of the Valkyries to start playing from somewhere.

7. Black-collared Barbet.
These are also vocal species, with the pair performing a lively duet. They are fruit eaters, and also hole nesters, and are able to actually make their own holes in soft wood (unlike the hordes of other hole nesters we have that can't actually make their own holes). They are parasitised by Lesser Honeyguide, so when you have nesting Barbets there's usually a Honeyguide presence in the area as well.

8. White-fronted Bee-eater.
Bee-eaters are always popular, and rightly so, with their vibrant colours and 'exotic' appeal. These are not really permanent residents in suburbia here, but can be seen anywhere as they move about, looking for insects. If you are looking for them specifically, they are often seen along the stream running through West Acres - drive along Kremetart Street and look for them perched on the powerlines. What a great Nelspruit garden bird!

9. Brown-hooded Kingfisher.
This is our resident Kingfisher and, as it is not a water-associated species (feeding on terrestrial insects mainly), it can be found in gardens and parks. In summer it is joined by the more flamboyant Woodland Kingfisher, but these are not that common in Nelspruit generally. Once again, the stream area along Kremetart Street is a good place to find Brown-hooded Kingfisher.

10. Amethyst Sunbird.
Sunbirds are another wonderful group of birds. Metallic plumage is almost standard, and there's no shortage of colour in the Family. And we have quite a few species here in Nelspruit - Amethyst, Scarlet-chested, White-bellied, Collared and Greater Double Collared and even Purple-Banded Sunbirds (the latter a relatively new arrival from northern KwaZulu-Natal), while Olive Sunbirds can be seen in our local botanical gardens.

11: Spotted Eagle Owl.
This lovely nocturnal bird is not uncommon in and around town. At one stage we had a pair roosting in our office garden, which was a real privilege; and waking up in the dead of the night to hear their soft 'Hooo... Hoo' duet is just magical. African Wood Owl is also common, adding to a decent suite of night birds to be seen in and around Nelspruit. Unfortunately they are susceptible to secondary poisoning after eating poisoned rats.

12. African Harrier Hawk.
This curious raptor is fairly common in town gardens and parks. There are only two members of the Genus (Polyboroides): The African and Madagascar Harrier Hawks (or Gymnogenes). Their unique trait is the 'double-jointed' legs, which allow the bird to bend its legs sideways, forwards and backwards to access nests, holes and crevices where prey may be hiding. It's great to see them hunting in the neighbourhood, usually accompanied by a rather agitated 'mobbing party' of smaller birds.

Other 'notable' birds we see here in our Nelspruit gardens include African Green Pigeon, Green Wood Hoopoe, African Hoopoe, Black-headed Oriole, Red-headed Weaver, Little Sparowhawk, Black Sparrowhawk (had a cracking few yesterday as one flew right over my roof while my wife and I were having afternoon tea outside), Black-backed Puffback (our 'logo bird'), African Paradise Flycatcher (summer), Yellow-rumped and Yellow-fronted Tinkerbirds, Natal Spurfowl, Blue Waxbill and Klaas's Cuckoo (summer as well), to mention a few!

And if you ever find yourself visiting Nelspruit on business or whatever, and you'd like to do some birding in the area, drop me a line here to set up a morning outing or whatever, or just to find out about where to go etc. 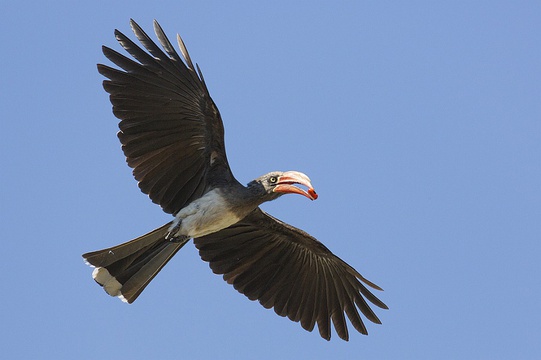 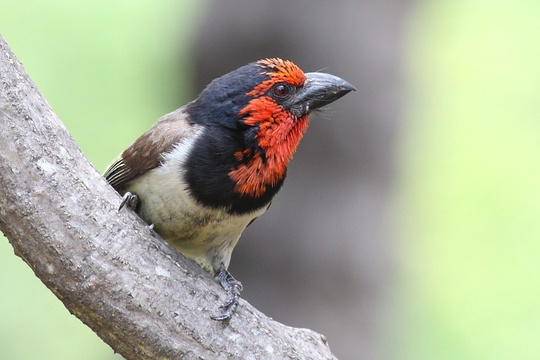 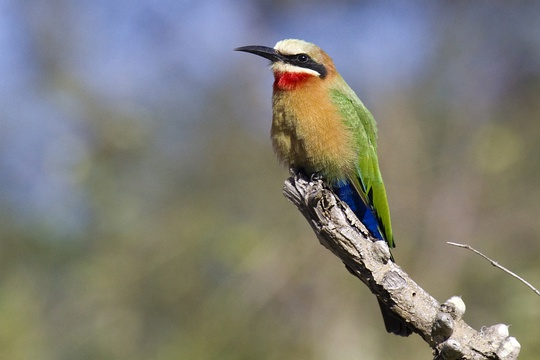 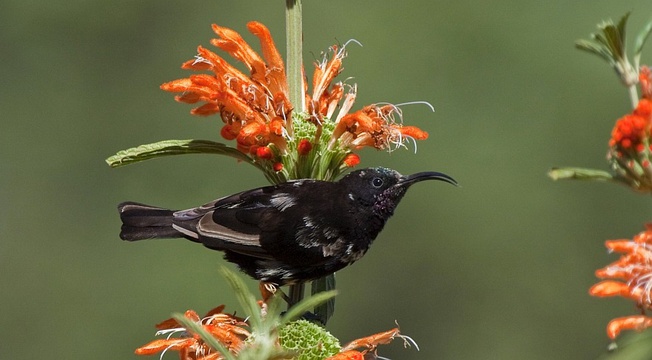 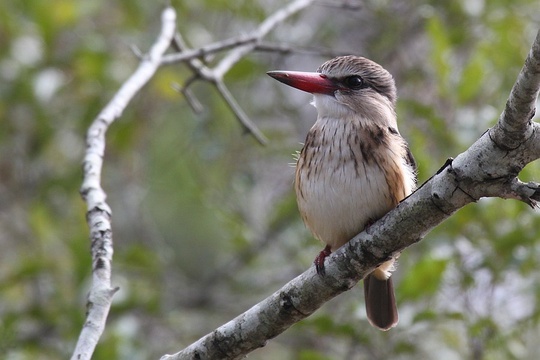 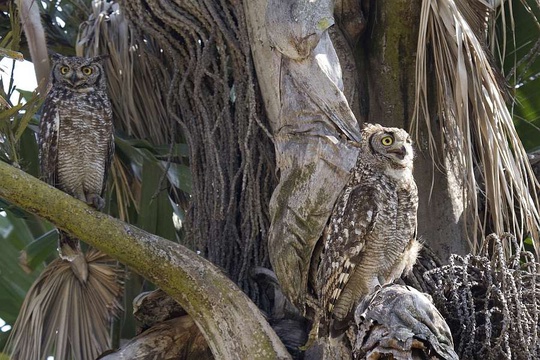 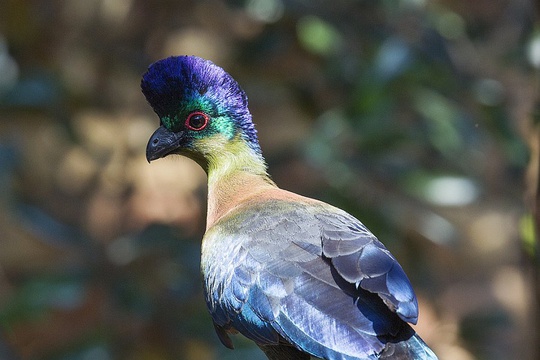 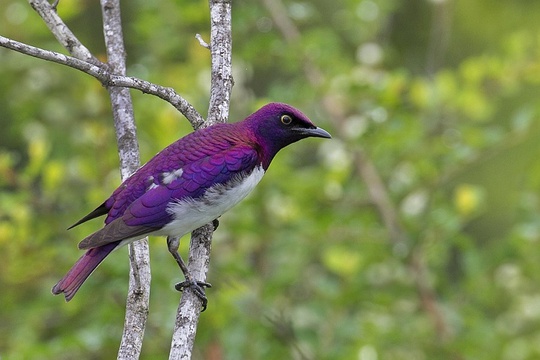 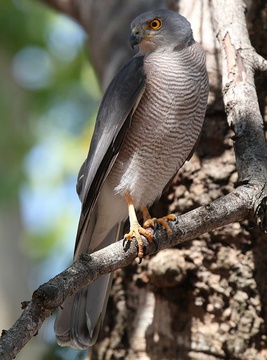 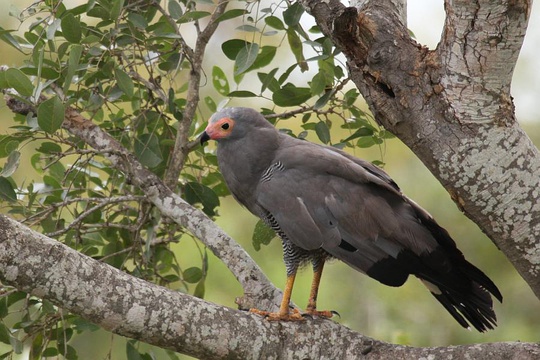 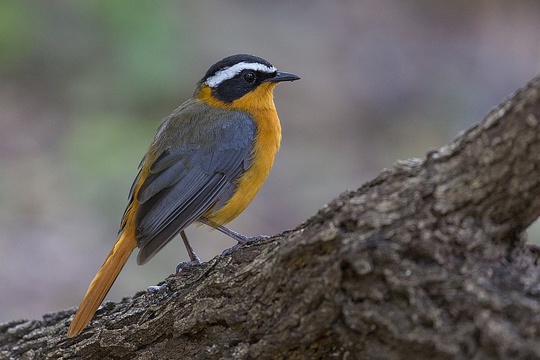